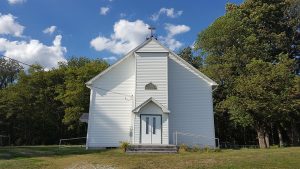 The 200 YEARS Homecoming for Village Cumberland Presbyterian Church, is coming on Sunday, Sept. 15, 2019 and the church invites everyone celebrate with them. Regular services are at 9:30 and 10:30 a.m. At noon a meal will be furnished. Praise and music starts at 1 p.m. featuring "The Haney's" from Salem, Ill. and Puppeteer Teresa Barger with "Little Man." Everyone is welcome and the church extends a special invite to those who are connected to the church through someone who has attended in the past.

The Old Village Cumberland Presbyterian church was organized September 22, 1819 and is located in Section 11, Township 7, Range 8, east of the Third Principal Meridian, five miles southeast of Norris City, Illinois.  It is one of the oldest religious organizations in this part of the state.  In early days, several families settled in a vicinity and it became customary to call their settlement The Village. Tradition also has it that earlier,  a branch of Shawnee Indians had a camp or Indian village near the place.  The church is situated on a little knoll near the old graveyard which contains the remains of many of the old pioneer settlers.

The first minister was Rev. David Macklin from Tennessee.  Camp meetings were held regularly for 52 consecutive years, until 1874 when, for a year or so, no service was held.  Many of the members had joined Mt. Olive Church as well as other societies that were organized as the country became more populous.

The current building was built in 1894, with a debt of $300 which was paid off by Mr. Elvis Campbell, Mr. Alex Edwards, and Mr. Obed Welch. Rev. W. J. Sneed was the minister and a tireless worker; it is in great measure due to his perseverance that the present building was completed. The original pulpit was refinished a few years ago, and the original paint was milk paint.  It was in use until Elder Ernie Morris made the furniture that is now in use.  He made the altar, the pulpit, the communion table, and three chairs.

Most of this information was taken from the book printed on the 150th Anniversary Year by Ernie Morris.