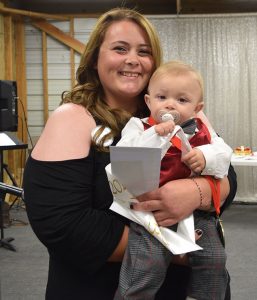 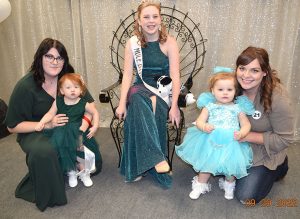 END_OF_DOCUMENT_TOKEN_TO_BE_REPLACED

With the help of an anonymous tip, Enfield Patrolman Mark Worlds recovered a stolen truck and 4 wheeler. The vehicles were stolen from the Fairfield area and the Fairfield police have taken over the investigation. Worlds has also written citations to Eva Pierce for trash and allowing a dog to run loose, Jessa Prater for the house on West Main Street that has been condemned, and Alicia Pierce for allowing a dog to run at large. All three are scheduled to appear in court on Monday, September 19 at 9:30 a.m. END_OF_DOCUMENT_TOKEN_TO_BE_REPLACED

The Enfield Village board made a decision at their monthly meeting on August 9 to move their regular meetings from the third Tuesday of the month to the second Tuesday. Beginning in September, the meeting will convene at 7 p.m. END_OF_DOCUMENT_TOKEN_TO_BE_REPLACED

Graelynn Healy, left, won the Baby Girl contest and Nora Wellen was the Runner Up. Both are being held by their moms.

Mr. Tot Brendon Sauls. Runner up Kyler Sisco was unavailable for a photo.

Runner Up in the Ms. Tot contest was Cora Harrison.

Mule Days crowned winners in the first of their group of pageants last night. The judges for the contests were Carla Gott of Carmi, Kaylee Shepard of Carmi and Haley Dagley of Norris City. END_OF_DOCUMENT_TOKEN_TO_BE_REPLACED

Enfield kicks off their 100th year of Mule Day celebrations this week on Thursday night with gospel music by Bringing Home at 6 p.m. followed by the Baby, Mr. and Miss Tot and Prince and Princess pageant contests.

Events continue on Friday night and Saturday, with the parade on Saturday afternoon and the weekend culminated with entertainment by Jackson Junction on Saturday night.

A $1000 bid submitted by Bob Butler for a 2001 Dodge truck offered by the Village of Enfield was accepted at Tuesday night’s board meeting. Two other sealed bids were also submitted, one for $250 and one for $800. END_OF_DOCUMENT_TOKEN_TO_BE_REPLACED

The pet parade kiddos had a wonderful morning for the event. Participation seemed a bit down but everyone won! Following the Pet Parade was a special Super Heroes Contest.