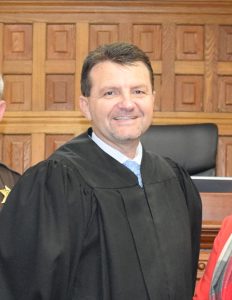 Another White County judge has again declared the FOID card unconstitutional and a violation of a law-abiding citizen's Second Amendment right to have a gun in her home in the case of People V. Brown. On Monday, Judge T. Scott Webb handed down his decision in White County Circuit court, affirming that the right to own a firearm in a person’s home for the defense of that home was clearly what the Second Amendment was about and that Illinois’s FOID Card Act essentially makes criminal a whole class of people who have a firearm in their home for self defense purposes, but do not have a FOID card.

The case involves Vivian Brown of White County who kept a single shot bolt action .22 rifle in her home for personal protection. She was eligible for, but did not possess, a FOID card. The Illinois statute establishes that “No person may acquire or possess any firearm…within this State without having in his or her possession a Firearm Owner Identification Card previously issued in his or her name by the Department of State Police under the provision of this Act.” Applicants are expected to furnish a photograph to the Department of State Police along with payment of a $10 fee.

Judge Webb joins his predecessor, retired Judge Mark Stanley, in arriving at the same conclusion in this case: FOID requirements violate a law-abiding citizen’s second amendment right to keep a gun in the privacy of their own home. Judge Stanley found the FOID requirements in Vivian Brown's case unconstitutional in February 2018. The state of Illinois requested that he take another look at it, but Stanley re-iterated and even supplemented his statement the following October, maintaining that the statute was unconstitutional or did not apply at all in Vivian Brown’s particular case. See story here.

The case was fast tracked to the Illinois Supreme Court in 2018. They remanded it back to White County Court in 2019 with instructions. See article here.

In Judge Webb’s ruling, he cited the sanctity of one’s home and the fact that the state has no legal say in the protection of one’s home, imposing fines and licensing, because of rights protected by the Second Amendment. The court agreed that the state did indeed have the interest of keeping firearms from felons and the mentally ill, but that FOID requirements go too far and trample on the rights of law-abiding citizens. The state could make no argument of evidence that law-abiding citizens in their own home were a threat to anyone and should be made to pay a fee to have a gun in their home. Webb stated that FOID is not like a driver’s license as gun rights are a constitutional matter. Webb compared FOID demands as akin to charging people a fee to vote from the privacy of their own homes.

“The ACT makes criminals out of law-abiding citizens who are attempting to protect their lives within their homes. After analyzing all of the evidence in this matter, this Court finds that FOID Card Act is NOT substantially related to an important government interests as applied to the Defendant in this case. In addition, the Court finds that any fee associated with exercising the core fundamental Constitutional right of armed self-defense within the confines of ones’ home violates the Second Amendment.”~~T. Scott Webb, April 26, 20121

It will be interesting to see if this case is again fast-tracked to the Supreme Court of Illinois and what happens after that. Will the Supremes sidestep the issue as they did last time or will they finally rule on the constitutionality of FOID in this type of case? Stay tuned.