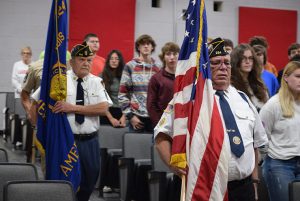 Area veterans were recognized Thursday at NCOE High School in Norris City with a morning breakfast for veterans and their families, followed by a school assembly program. The Color Guard was represented by the Carmi American Legion 224 with Dennis Bridgeman and Jim Mills, both veterans, and the Carmi VFW Post 3851, represented by Andy Willis and Micheal Baxley.

Toby Prather of the NCOE student council welcomed everyone and the band played the National Anthem. Four veterans in the audience were recognized. A short video presentation with speeches by former presidents and moving pictures of veterans was displayed. Mayor Skip Land, also a veteran, gave a short speech to the students. Mayor Land said he served 4 ½ years in the army and that the experience taught him alot.

"My heart reaches out to those veterans who have been wounded and are disabled now."

Principal Brad Wehlermann closed the assembly with this quote from his veteran father..."Freedom isn't passed down from generation to generation; it's earned by each new generation."

Veterans Day will be recognized on Friday this week.