Mike Cunningham (lt.) on the bagpipes and Jim McKenzie on the drums.

This year's Memorial Day, which was probably the first publicly-held event in Carmi in recent months, held out the hope of good weather and sunshine. It was the first day that forecasted temperatures would approach the 90 degree mark, but the morning temps were enjoyable as 100 plus gathered at the Veteran's Memorial Park in Carmi to recognize and remember the sacrifices many have and are still making for the freedoms Americans enjoy. The event was sponsored by Illinois Patriots, a group founded in Carmi by Bill and Kelli Chapman and Patricia Trout. At least one WW2 veteran, James Robert Endicott of Carmi, was in attendance. 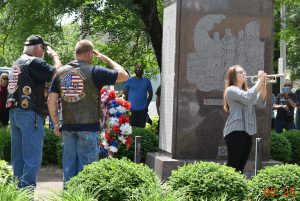