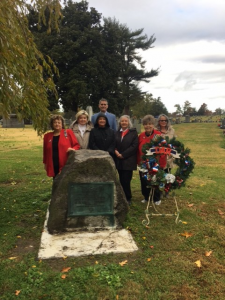 In her prayer, Chaplain Cheri McClusky praised the Revolutionary War soldiers for their boldness, their courage, their character.  She honored their vision, their selflessness, and their resolve. These Revolutionary soldiers imperiled their lives, fortunes, and sacred honor to form these United States of America.