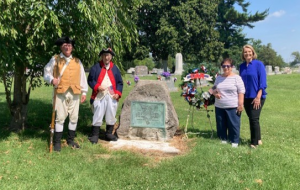 On the 4th of July, the Sons of the American Revolution Long Knives Chapter held a Reenactment of the Declaration of Independence. The event was held at the “Lil Arlington” cemetery in Harrisburg.

The Michael Hillegas Chapter National Society Daughters of the American Revolution were pleased to be a part of the celebration.