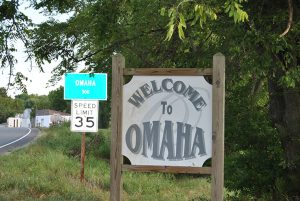 The storm sewer project was again on the agenda Monday night at the Omaha Village Board meeting as President Bob Lambert introduced Matt Wiggins of Clarida Engineering to speak to the board via teleconference. Board members Jon Davis and Scott Sauls maintained the board had not been consulted about details of the plan after Clarida moved forward on it following the grant approval. At issue was the scope of the project. The plan to repair a collapsed storm sewer below and between First and Second Streets in the downtown area had been initiated some time ago, but in the interim, it turned into a project that extended all the way to the creek, according to board members. END_OF_DOCUMENT_TOKEN_TO_BE_REPLACED

The Omaha Village Board will conduct their June meeting via conference call tonight. The toll free number to use is 1-(844) 854 8432
The Conference Code is  65124924. A roll call will be taken in order to document attending trustees and visitors. Use *6 to mute the call on your end if necessary  and #6 to unmute. END_OF_DOCUMENT_TOKEN_TO_BE_REPLACED

Due to the state COVID19 shut down, the Omaha Village board held its first meeting in two months via teleconference on May 18  after the monthly board meeting was cancelled on May 11. Consequently, this meeting was termed a Special Meeting. The agenda stated that the Village could not pay its bills unless a meeting was scheduled. END_OF_DOCUMENT_TOKEN_TO_BE_REPLACED

The Omaha water tower was again on the agenda as the Board met for their March meeting on March 9.. Matt Wiggins from Clarida and Ziegler Engineering was on hand to continue a conversation about moving forward and get the water tower work done. END_OF_DOCUMENT_TOKEN_TO_BE_REPLACED

The Omaha Village Board gave its attention to the issue of dumping at its regular monthly meeting on Monday, February 10. END_OF_DOCUMENT_TOKEN_TO_BE_REPLACED