Continues his assault on Liberty

Louisville – According to new media reports, Governor Pritzker is seeking an emergency rule that would result in adding a legal crackdown to his weeks-long economic shutdown of Illinois. State Rep. Darren Bailey (R-Xenia) issued this statement in response: END_OF_DOCUMENT_TOKEN_TO_BE_REPLACED 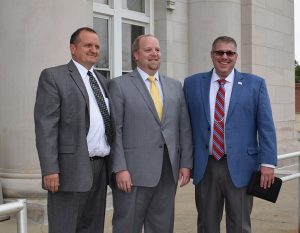 Rep. Darren Bailey and his law team. Thomas DeVore (left), Erik Hyam (center) of Silver Lake Group, Ltd. and Bailey outside the courthouse on Friday after the governor's motion to transfer the case out of Clay County was defeated. Photo by Kathy Sands

Representative Darren Bailey’s quest to free himself (and set a precedent for others) from the Governor’s continued executive orders that are keeping Illinois citizens essentially on lockdown status, took another step forward yesterday as he prevailed against a motion by the state to transfer the case to Sangamon County, which would have taken it out of Clay County and away from the scrutiny of Chief Judge Michael D. McHaney of the fourth circuit. END_OF_DOCUMENT_TOKEN_TO_BE_REPLACED 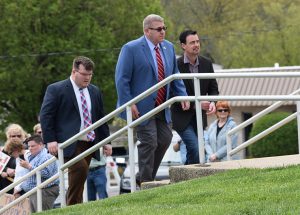 Representative Darren Bailey (center) of the 109th District heads back to court tomorrow in Clay County to challenge JB Pritzker's authority to issue continuing quarantines in the state. Photo by Kathy Sands

New activity in the Darren Bailey v. Pritzker case has been materializing this week, resulting in a showdown which mirrors the feeling of many citizens of Illinois about the state governor, as businesses and citizens alike continue to suffer increasing loss of revenue due to the governor’s executive orders concerning the COVID19 virus. Other states around the country are seeing similar push backs. END_OF_DOCUMENT_TOKEN_TO_BE_REPLACED

Louisville, IL. – State Representative Darren Bailey said today he asked the Appellate Court to voluntarily vacate his restraining order against Governor J.B. Pritzker’s Executive Order that shut down most of Illinois and ordered citizens to ‘stay at home.’ However, his efforts seeking the Court’s determination that the Governor exceeded his authority will not end but will only get stronger. END_OF_DOCUMENT_TOKEN_TO_BE_REPLACED

The Illinois governing authorities are in dispute over the Governor's emergency powers during this COVID-19 health pandemic and citizens are rising up against the continued shutdown, as their businesses and employment are being put at risk. Another lawsuit has been filed by an Illinois Representative in northern Illinois  on behalf of all the residents of Illinois, and the governor is currently appealing Monday's ruling from a Clay County judge who ruled in Representative Darren Bailey's favor. With all the legal wrangling going on this week and with another 30-day shutdown order in Illinois, per Governor Pritzker's Executive Order, the Villagers' Voice asked White County State's Attorney Denton Aud to issue a statement regarding White County law enforcement's stance on enforcement of that Executive Order.  This was his reply: END_OF_DOCUMENT_TOKEN_TO_BE_REPLACED

For those who may be interested, we are sharing the link to the transcript from Monday's court hearing in Clay County where Representative Darren Bailey challenged the new Executive Order from Ill. Governor Pritzker, which is set to go into effect for an extended 30 days on Friday, May 1. Bailey prevailed in Clay County court on Monday in his pursuit of a temporary restraining order, which frees him alone from the requirements of the order set to go in effect on Friday, May 1.  END_OF_DOCUMENT_TOKEN_TO_BE_REPLACED