The Flamm family of Flamm Orchards are teaming up with University of Illinois Extension to host the first of four twilight meetings at their farm on Monday, May 17, 2021 starting at 6 p.m. University of Illinois Extension Educators, Bronwyn Aly, Nathan Johanning, and Katie Bell have been partnering with area farmers over the past seven years to provide four evening “twilight meetings” to highlight and demonstrate diverse farming enterprises across southern Illinois. Anyone involved or interested in local food production or learning more about farms in our region is encouraged and invited to attend. END_OF_DOCUMENT_TOKEN_TO_BE_REPLACED

The Southeastern Illinois College Board of Trustees met Thursday, April 29, at 6 p.m. in the Heritage Room in the Harry L. Crisp Student Center to approve a contract with the SIC Education Association (SICEA), approve an early retirement incentive, and receive an update on the status of the David L. Stanley White County Center expansion, among other items. END_OF_DOCUMENT_TOKEN_TO_BE_REPLACED 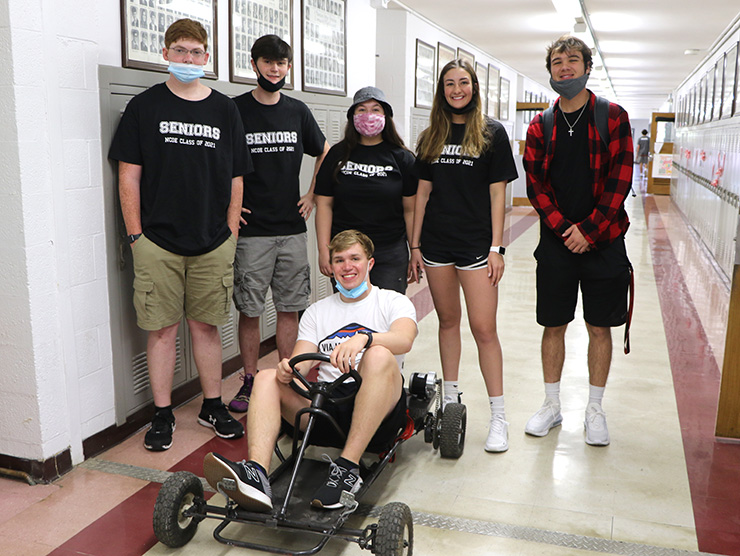 NCOE teacher Jimmy Goebel's students tossed around several ideas for a project this year and settled on trying to build an electric go kart. The project required many hours of research and hands-on work to get everything to work properly.
The electric go kart has variable speed settings in forward and reverse. With this kind of project, students often run into unpredictable problems and this was no exception. However, the learning experience gathered from solving real-world problems is so valuable to their learning experience. The students began researching and gathering materials in February and finished the project on April 30.

Delivering on principles laid out last year by Gov. Pritzker and after months of working group meetings including lawmakers, advocates, and industry, the Consumers and Climate First Act was introduced in the General Assembly today by Senator Celina Villanueva and Representative Kam Buckner. The legislation provides a path for Illinois to help lead the nation’s transition to a clean energy economy. The bill serves as a starting point — a series of markers intended to help guide the energy negotiations underway in Springfield. A detailed overview of the legislation is attached. END_OF_DOCUMENT_TOKEN_TO_BE_REPLACED

Anita Sue Morehead, age 78, passed away peacefully at home surrounded by her children on March 29, 2021 due to various health conditions. She was born on June 27, 1942 in Norris City, Illinois to Leland and Pearl (Allen) Austin. She married her hometown sweetheart, Charles Denzil Morehead (“Charlie”), on February 4, 1961. The couple moved to Chicago where Charlie attended University of Illinois Medical School, while Sue attended University of Illinois at its Chicago campus. The couple resided in St. Louis MO, Eldorado IL, Augusta GA and Louisville KY before settling in Paducah. After 52 years of marriage, Charlie preceded her in death in 2013. END_OF_DOCUMENT_TOKEN_TO_BE_REPLACED