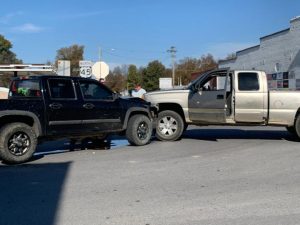 Two pickup trucks collided Wednesday around 12:45 p.m. at the downtown four way stop at Main and Division. They both pulled out from their respective stop signs and collided in the middle of the intersection, blocking it for awhile, although traffic was being routed around it while Police Chief Dustin Dale investigated. White County Sgt. Craig Poole also was on the scene to assist.

William S. Franks, 29 of Norris City, driving a Chevrolet Colorado (black) and Michael R. Kilmer of Enfield, driving a Chevrolet 1500, met in the middle of the intersection and collided hard enough that the trucks could not be separated by just backing up. Gig Johnson managed to separate them and the Colorado was towed.

Kilmer drove away in his vehicle. No injuries were reported.

On Thursday, another accident at the corner of N. Division and Wright St. involving Tiffany Quinn, 36 of Enfield and Brenda Nelson, 52 of Norris City, resulted in Nelson's Nissan Altima being towed. Quinn was driving a Chrysler that sustained damage to the front passenger side, while the Nissan had rear driver's side damage.