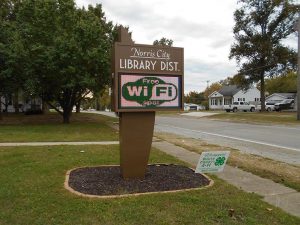 The library is holding our fall book sale! Mask up, stop by, and stock up. We have hundreds of gently used books at unbeatable prices! Nothing is over $1.00. Hope to see you there!

We would like to congratulate the winners of our prize drawing. Bonnie Remley won the book “Under Currents” by Nora Roberts and Lavina Pearce won the book “Twisted Twenty-six” by Janet Evanovich. Susan Healy was the Grand Prize Winner, she won a new 10’ Lect’rus Tablet. The tablet will be great to use the Cloud Library App and to check out eBooks and eAudiobooks - remember that a current library card allows patrons of the library to check out books from the Cloud Library 24/7. Congratulations!

Don't have a library card? Those who live in the Norris City School District can sign up for a card and it is FREE. A current driver's license, a copy of a utility bill, statement, etc. with a current address listed and a current working phone number are needed to apply for a library card.

SEPTEMBER is library card sign-up month so stop in and see us @ the library!!

NEW BOOKS: “Blind Faith” by Sharon Sala. He has nothing and everything to lose ... When a seventeen-year-old boy goes missing while camping with his buddies in the Chisos Mountains in Big Bend, the case is right up PI Charlie Dodge's alley. Charlie's reputation for finding missing people--especially missing kids--is unparalleled. Unfortunately, trouble seems to be equally good at finding him. Charlie's still in the thick of it when bad news arrives regarding his wife, Annie, whose early onset Alzheimer's is causing her to slip further and further away. The timing couldn't be worse. Thankfully, Charlie's ride-or-die assistant, Wyrick, has his back. But when Universal Theorem, the shadowy and elusive organization from Wyrick's past, escalates its deadly threats against her, it pushes both partners past their breaking points. Finding people is one thing; now Charlie will have to fight to hold on to everyone he holds dear.

“One Last Lie” by Paul Doiron. "Never trust a man without secrets." These are the last words retired game warden Charley Stevens speaks to his surrogate son, Warden Investigator Mike Bowditch, before the old man vanishes without explanation. Mike suspects his friend's mysterious departure has to do with an antique warden badge that recently resurfaced at a flea market - a badge connected to a cold case from Charley's past. Fifteen years ago, a young warden was sent on an undercover mission to infiltrate a notorious poaching ring and never returned. He was presumed dead, but his body was never recovered. Desperate to find Charley before he meets a similar fate, Mike's investigation brings him to the miles of forest and riverside towns along the Canadian border-but he soon learns that even his fellow wardens have secrets to keep. And Charley's past isn't the only one coming to light; his daughter, Stacey, has resurfaced to search for her missing father, and Mike must grapple with the return of the woman he once thought was gone forever.

"Chaos” by Iris Johansen. Alisa Flynn, a CIA agent who may be willing to go rogue if it means catching the most heartless band of criminals she's ever encountered. Alisa is aided by mysterious billionaire-genius-inventor Gabe Korgan and recurring character Margaret Douglas, an animal whisperer who brings along her beloved dog Juno to fight alongside them. Alisa is determined to rescue schoolgirls kidnapped from their African boarding school, in a ripped-from-the-headlines story. But Alisa is hiding her personal stake in the rescue from Korgan, and when the truth gets out, the stakes grow even higher. Now Alisa and Gabe's budding relationship may be at a breaking point.

“The Revelators” by Ace Atkins. Shot up and left for dead, Sheriff Quinn Colson has revenge on his mind. With the help of his new wife Maggie, rehabilitation, and sheer force of will, he's walking again, eager to resume his work as a southern lawman and track down those responsible for his attempted murder. But someone is standing in his way: an interim sheriff, appointed by the newly elected Governor Vardaman, the man who Quinn knows ordered his murder. Vardaman sits at the top of the state's power structure--both legal and criminal--and little does he know, Quinn is still working to take him down. Quinn will enlist the help of his most trusted friends, including federal agent Jon Holliday, U.S. Marshal Lillie Virgil, and Nat Wilikins, an undercover agent now working for crime queen Fannie Hathcock.