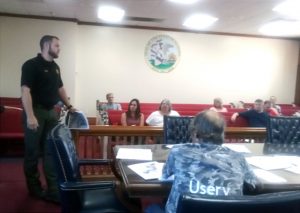 White County Sheriff Randy Graves reported that Deputy Nick Capeheart had recently resigned from the department and had been hired by the Gallatin County school. Graves said he had re-hired Mike Brown and also hired and trained a dispatcher who had quit already. Graves said he is looking at having two dispatchers retire soon, so he will be looking to hire more dispatchers.

Ambulance Director Adam Allen reported that the Service had $6000.oo in positive revenues for the last month and that ambulance runs were increasing and keeping the Service quite busy. Allen said he has been running two crews and that the new ambulance was in.