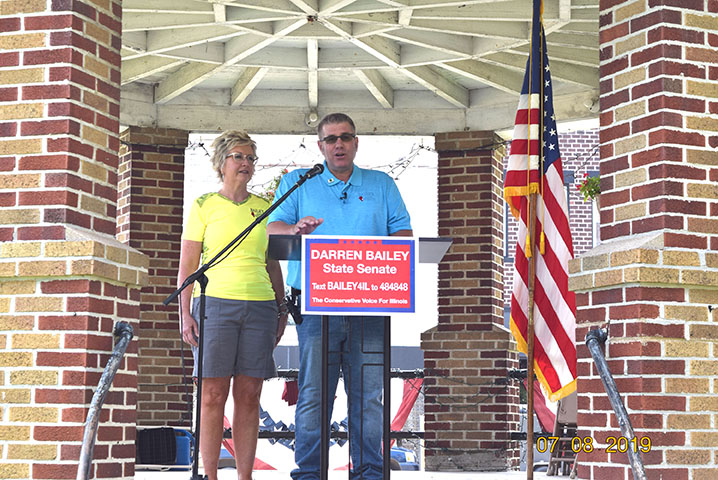 Cindy and Rep. Darren Bailey (R-109th) of Louisville, Ill. Bailey announced he will run for Illinois State Senate on Monday, July 8, at the Wayne County Courthouse.

Citing concerns for the future of his eight grandchildren, Representative Darren Bailey R-109th District today (Monday), with his wife Cindy beside him, announced his intention to run for the 55th District State Senate seat election in 2020. State Senator Dale Righter (R-Mattoon) has announced he will not be seeking re-election to the 55th District Senate seat he has held since 2003. Righter intends to serve out the remainder of his term, which expires in January of 2021.

‘This has been an awesome journey. I want to thank my wife Cindy. There’s no way I’d be doing this without her encouragement and her prayers,” Bailey stated. “The prime reason I’m doing this is for my eight grandchildren, all under the age of 6. This is not about me or any ambition I have. I absolutely love representing the 109th district.”

“But opportunity comes and we have to turn it over to God for wisdom of what we do with that opportunity. I truly believe that this is an opportunity that I, as your representative, with the shape that Illinois is in, and with the dire circumstances that the 109th and southeastern Illinois is in, that I must take this to the next level.”

“Two years ago I decided to run for public office because I was tired of seeing our republican leaders betray our conservative values,

Bailey uses Facebook regularly to keep his constituents advised of current bills in the general assembly.

Bailey said there came a time when he could no longer be a bystander of the political scene in Illinois. He loves working on his farm, for his school, his family and in his community, but says all of that is at stake. He planned on running for State Representative again, but when he learned that Dale Righter would not seek re-election, he consulted with many in the 109th District who encouraged him to go forward and seek the seat. He stated he had not planned to run for the Senate. Bailey has been in the assembly since January 2019.

“I want to go back to Springfield as your State Senator and change our corrupt political culture. We are at a crossroads here in Ilinois. We either implement the reforms that we need to get our state back on track, or we can continue the failed policies that are driving our state in the ground and driving our residents out of Illinois.

“I will oppose Governor JB Priztker’s radical left wing agenda as your State Senator. I will stand for the principles and values of the people of this district.

“I will need your support and your help,” Bailey concluded.