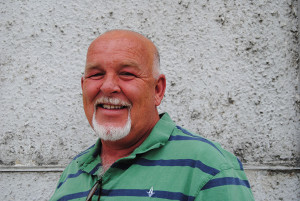 We have a “cornucopia” of grandkids. It seems we have an unending supply. They just keep coming, at least until they get old enough to know I didn’t invent everything from soup to nuts. I did invent the Spam Cannon, but that’s another story.

Several grandkids are cursed with living in the city. With its glamorous hamburger cafes and fancy indoor plumbing, they’ve never learned how to live. Most of them have never seen a 2-hole outhouse or played poker with cow chips. Not a one of them knows the proper way to grab an electric fence or how to chase a rooster. They may not even know what a ditch is.

The need for country classes is great. That’s where I come in. I teach at “Grandpa’s Country Clinic and Pie-a-Rama.” The course objective is to whittle, shoot, drive, and creek-walk without getting killed and without touching Grandpa’s recliner or pie.

We learn to whittle. The term whittle means sit idly and scrape thin layers off of a stick that deserves scraping. Scrape away from your body, not toward yourself. Don’t run, jump, or ride a hoverboard while holding an open knife. If you screw up and cut yourself, you have to tell your mom I didn’t allow the knife-play. I explain to the kids that old men used to sit in front of the courthouse and whittle. That’s how we won WWII and how we invented fruit pies. It’s a necessary skill. The goal is to go in with 10 fingers and a stick, and to come out with 10 fingers and a toothpick.

Shooting is done with a Red Ryder BB gun. Our philosophy is that a gun is a tool, like a pipe wrench or a pie server. It’s only as good as the person that is using it or serving the pie. We learn sight alignment and trigger control. Safety is simple and consists of two steps. The first is: Don’t shoot your cousin in the butt unless you can outrun him. He’ll try to roll you into a ditch and push your face in the mud. Second: Don’t shoot your eye out. There’s also a third step, which is don’t tell your mom or she’ll roll Grandpa in a ditch. Nobody wants that.

Anyone can drive an automatic transmission car on a road. It takes skill to drive an old truck down a lease road and through a field. If your head doesn’t hit the roof, and if you don’t bite your tongue, you ain’t doing it right. This course includes riding in the bed of the truck and getting slung around with a variety of mostly empty cans and firewood. Once again, don’t tell Mom and don’t get me rolled in a ditch.

Creek walking is easy and refreshing. People usually don’t run their sewers into the creek anymore. Mostly they don’t do that. Creek water eliminates the bad stuff by flowing a mere 800 to 900 miles so it’s safe-ish. We used to drink it when I was a kid, and I never died. Drinking it may be why I’m short, weird, and glow in the dark, but I didn’t die.

Creek walking is one time it’s okay to have your face in the mud. I bet that the flowing water is chock full of beneficial probiotics and will make your microbiome the best it can be. I look at it as getting for free what people pay hundreds for in fancy spas. Think of creek walking as a day at a spa. I’m thinking Mom will thank me. It would probably do her some good to wade a couple of miles in muddy water and splash on little mud on her crowfeet.

The complete program takes a long weekend, but the bug bites and poison ivy keep on giving long after the other fun ends. The whittling, shooting, driving, and creek walking are memories that are with you forever. Maybe it’s best to not mention it to Mom. I have trouble getting out of the ditch and back to the recliner.

You can contact Charlie via email at geezer.rocker@gmail.com or by mail at PO Box 378, Norris City, Il 62869. Don’t tell the moms. Remember that “snitches get stitches, in ditches.”

Charlie Melton can be reached by emailing him at geezer.rocker@gmail.com or writing him at P.O. Box 378, Norris City, Il 62869. Other warranties may apply if you look it up on the internet.