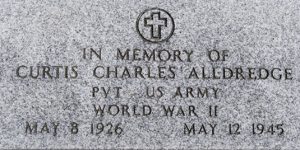 Photo of Curtis Alldredge's name on the Wall of the Missing in the Netherlands. Photo provided.

The Faces of Margraten Project in the Netherlands honors the American soldiers buried in the cemeteries there from WW II. A family adopts each grave and pays respects each year. This tradition has been in place for 75 years.

The project is looking for photos of fallen servicemen buried in the Netherlands. A photo for Curtis Charles Alldredge is needed. The St. Louis National Archives have been searched, but no photo was found. His parents (Ben and Madeline) are buried at Powell Cemetery. He has a memorial monument next to his parents. Curtis's name is on the Wall of the Missing. A friend of a Belgium soldier took the photo above.