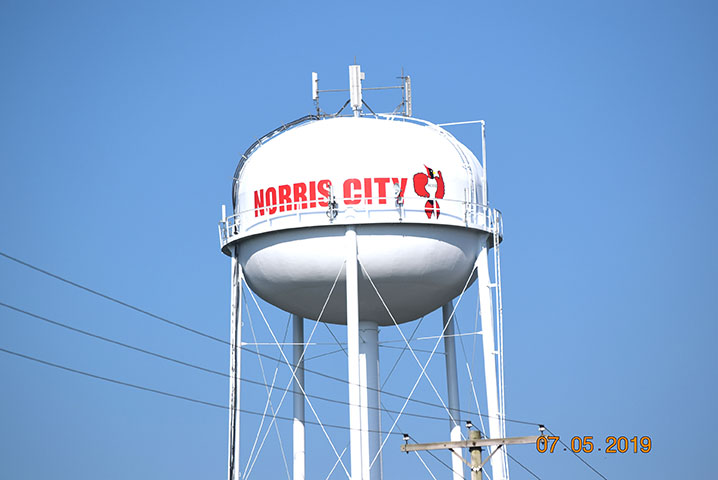 The Norris City water tower has a new paint job. The Suez company was due to finish painting last Tuesday. July 2, according to the board on Monday night. The new look features the village name in red letters and a Cardinal painted on the tank as a nod to the NCOE Fighting Cardinals. The tower was on schedule to start refilling with water on Wednesday.

The July meeting of the Norris City village Board convened at 7 p.m., last Monday with a quorum present. Board members Skip Land, Kevin Pettijohn, Wayne McKenzie and Joe Skaggs were in attendance along with Mayor Roy Kissel and Clerk Jim Crouch. The June minutes and the Treasurer’s report were approved. The bills were approved for payment.

Jim Brown of Brown and Roberts Engineering addressed the board about a new EPA Loan/Forgiveness program for small communities. This is for Phase 3 of the water line rehabilitation project. Brown said it is best deal he’s seen in 43 years. Illinois EPA has asked for smaller water lines to be replaced. Norris City has some two inch lines and even some smaller ones that need to be replaced. Brown presented a pre-application to start the process for the program.The board voted to move forward with the pre-application process. The mayor stated that if he understood everything correctly, the 25% the village would owe probably could be easily be paid for with only a $1 increase on water bills each month.

Donavan Mead brought visuals of the work he has done and blueprints to further acquaint the board with his work with metal fabrication and welding. No vote was taken on the TIF request as the board asked for references from his former employers before a decision will be made. Mead  is asking the village for some $36,000 in TIF funds to start up his welding and metal fabrication business on W. Main.

Luke Marsh had more information for the board on the village signs. Three signs will cost $1132 each in a bulk purchase, and the shipping cost is $305. Ordering them together gives cost and shipping savings. The cost would be $3396 plus $305= $3701. The board voted to pay the balance on the signs.

A representative of the local American Legion approached the board about obtaining TIF funds to do exterior work on the Legion building. He said the exterior doors need replacement.. The building was built in 1949. A veterans’ appreciation fish fry is scheduled for Saturday, July 13 at the Legion. The TIF request will be on the next board agenda.

A few trustees expressed concerns about things in town: an irregular sidewalk on N. Division is on the state’s right of way, leaving the village without recourse until they do something. The police department may need some equipment. Entry to the ball diamond has been patched.

The Police Department reported two aggravated battery reports for the month of June, along with one report of criminal damage, one of sexual abuse, one vehicle accident, one wanted on warrant, one trespass, one resisting arrest and one domestic battery and three arrests. There were three citations, one for off road vehicle, one improper lane usage and one driving while license revoked. Nine calls came in to 911, 16 to Dispatch, 12 to the office or non/emergency calls and 24 citizen calls.

In the animal control report, it was noted by the mayor that stray cats being fed by residents are still a problem.

MFT bid letting is on Wednesday, July 10, at 10 a.m. Oiling roads is to be done by the  end of July, giving the oil time to set before school starts. The board voted to give the mayor the authority to award an acceptable bid should there be no quorum on the 10th.

After discussion, the board decide to install new stop signs on eastbound Orchard at the intersection with East St. and on northbound Carroll by Beaty Field. Mayor  Kissel will get the ordinances written.

Carl Whipple is no longer manning the police phone. If one calls the 378-3900 number, they will get a message from the mayor to call 911 if it is an emergency. For non-emergencies, they are to call during office hours. Having a gas emergency? Exit the building and call the on-call number.

The mayor stated the office is needing fireproof cabinet space in office in a legal size. The cost could be $3000 to $4000. Mayor Kissel asked for permission to look into purchasing a cabinet and the board concurred.

The board gave the mayor permission to advertise for bid the surplus police squad car (as is status).

The mayor asked for a resolution to repair or demolish the house on North Division belonging to Erica Roberts. The board voted in favor of R-19-02.

The old fence at Beaty Field started coming down Monday in preparation for a new fence that will start going up July 8. Some landscaping may need to be done.

Illinois Congressman Bailey will hold a Town Hall meeting on Wednesday, July 3 from 1-2:30 p.m. Auditors are using the board room, so the meeting will be held in the mayor’s office.