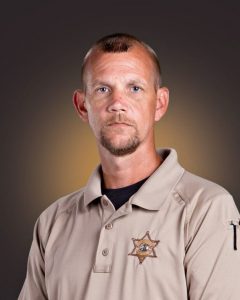 On Dec. 29, 2021 at approximately 5:00 a.m., ISP DCI Zone 8 was requested to assist with an officer involved shooting. Preliminary reports indicate that Deputy Sean Riley of the Wayne County Sheriff’s Office was dispatched to a motorist assist on Interstate 64 eastbound at Milepost 115. A short time later another responding officer located Deputy Riley deceased on scene. The Deputy’s squad car was missing and then located abandoned a short time later just east of the scene.

It is believed that the suspect, Ray Tate, a 40-year-old male from Hopkinsville, KY carjacked a truck tractor semi-trailer near the area Deputy Riley’s squad car was located. The driver of the truck tractor semi-trailer was held against his will and drove Tate to a gas station in St Peter’s, Missouri. While in Missouri, a series of carjackings, robberies and shootings occurred. Tate then traveled back into Illinois with a kidnapped victim in another stolen vehicle. That stolen vehicle was located at a residence in rural Carlyle. Tate committed a home invasion and took the homeowner and the kidnapped victim hostage at a residence in rural Clinton County. At approximately 1:42 p.m. ISP Special Weapons and Tactics (S.W.A.T.) operators were able to make entry into the residence and took the suspect into custody without incident. The homeowner and kidnapped victim were located in the residence uninjured. Tate was then transported to the Clinton County Jail where he is being charged with First Degree Murder by the Wayne County State’s Attorney.

“On behalf of the Illinois State Police, I extend my heartfelt condolences to Wayne County Deputy Sean Riley’s family, friends, and brothers and sisters at the Wayne County Sheriff’s Office,” stated ISP Director Brendan F. Kelly. “Once again, the Illinois State Police has safely apprehended an alleged cop killer with exceptional professionalism, patience and persistence standing side by side with all Illinois law enforcement through another dark and difficult moment. Mercifully, this incident was concluded with no further harm to first responders, and this defendant will now face justice,” concluded Kelly.

The Illinois State Police was assisted by multiple agencies in southern Illinois and eastern Missouri that worked together to bring this fugitive to justice.