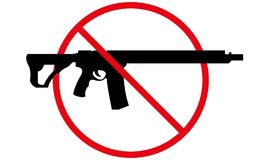 With the new gun law in effect in Illinois, banning certain guns, more than half of Illinois's 102 counties are saying they won't comply. With local sheriffs releasing press releases on social media  saying they won't enforce it, the IL governor responded, "They will do their job or they won't be in their job," Governor JB Pritzker said of police enforcing the gun ban and registry law that he enacted Tuesday after more than half of the county sheriffs in the state published statements on Wednesday vowing that they will not enforce it. The governor also said "retailers will be able to continue to sell" to out of state customers and police, but not to regular Illinois taxpayers“.

"The assault weapons ban is the law of Illinois. The General Assembly passed the bill and the governor signed it into law to protect children in schools, worshippers at church and families at parades from the fear of sudden mass murder,” the governor’s spokesperson added in a separate statement to the media.

“Sheriffs have a constitutional duty to uphold the laws of the state, not pick and choose which laws they support and when,” the spokesperson continued.

Gun-rights groups say the ban won’t last long, affirming that they are gathering together to file challenges in federal court by next week. Guns Save Life Executive Director John Boch said it’s unconstitutional and they’ll prove it in court.

Map of counties (in red) as of Wednesday this week who say they won't comply with the new gun ban in Illinois. More are expected to be added.