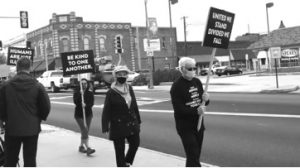 THIRTY-NINE COUNTIES is a 50 minute documentary about civic engagement and peaceful public action born out of the need to reckon with a country’s great divide. With care and forethought, one year ago, in the middle of a pandemic, Glenn Poshard planned and organized 39 different marches for peace, unity and nonviolence in all the counties he represented during his time in the US Congress. Poshard has been worried that the division that has filled our country, ‘our beloved country’ as he calls it, could bring trouble or even violence to bear. Glenn and his wife Jo, managed, in 28 days, to march in all 39 counties; driving hundreds of miles from county to county to meet and greet the people who answered the call to march for peace and unity in a troubled time. This documentary chronicles all the marches, the people who participated in them and the inspirational historical oratory presented to them by Congressman Poshard. THRITY-NINE COUNTIES reminds us that the strength of a democracy is in its citizenry.

Producer/director of the film Sandra Pfeifer says, “Both Glenn and I feel it is important to show the film at this time as a special public service since the country continues to see serious division.” Pfeifer goes on, “Our hope is that this screening will inspire public participation in the democratic process.” She added, “We are grateful to all our regional partners for their help in screening the film.”

There will be no charge to view the film, which is free and open to the public