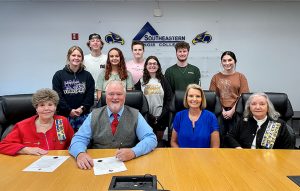 A proclamation signed by Southeastern Illinois College President Dr. Jonah Rice designates Sept. 17 – 23, 2022, throughout the college district as the 235th anniversary of the drafting of the Constitution of the United States of America by the Constitutional Convention.
Members of the Michael Hillegas Chapter of the National Society Daughters of the American Revolution (DAR), along with a number of SIC students were present for the signing.

The tradition of celebrating the Constitution was started by the Daughters of the American Revolution. In 1955, DAR petitioned Congress to set aside Sept. 17-23 annually to be dedicated for the observance of Constitution Week. The resolution was later adopted by the US Congress and signed into public law on Aug. 2, 1956, by President Dwight D. Eisenhower.

The SIC Student Activities department recognizes Constitution Week with a special exhibit that can be viewed in A/B lobby Posters, exhibits and a copy of the proclamation are also on display at the Harrisburg District Library and the Norris City Library. The proclamation is also posted in the Saline County Courthouse.

The Michael Hillegas Chapter Daughters of the American Revolution asks citizens “to reaffirm the ideals the Framers of the constitution had in 1787 by vigilantly protecting the freedoms guaranteed to us through this guardian of our liberties, remembering that lost rights may never be regained.”