The ’76 Clovers 4-H Club held their October meeting at Boyd Park in Norris City on October 7, 2021. The meeting was called to order by the leader at 3:38 p.m. and adjourned at 4:07 p.m. Kate Vollman took attendance. There were ten members, two leaders and four visitors present. Cole Roberson led the 4-H pledge and Kallen Sutton led the American Pledge.

Skip Land, Norris City Mayor, was in attendance for the National 4-H Week Proclamation signing and a photograph. The members worked on the 4-H window display on September 28 at Cornerstone Coffeehouse. The theme was “White County 4-H…A Century of Making the Best Better!” Thank you to Liam and Quinn Forston, Kallen and Lanson Sutton and Cooper and Marlee Fuqua for walking through the Dairy Days Parade and carrying the etiquette signs. Members were asked to bring canned goods for the October Club Food Challenge that will be donated to a local food pantry. Members are asked to donate money towards a basket that will be auctioned off at the St. Jude Auction at S&H arena in November.

The October federation meeting will be held October 7 at the GIFT Garden in Carmi at 5:30PM. A dog obedience clinic will be instructed by Rosemary Harlow at the Livestock Barn on October 14th, 21st and 28th starting at 6:30PM. The Corn Day Coronation will be at noon on October 9th and the parade at 4:00PM if anyone is interested in walking through with 4-H. There will be a sign language workshop held at the Extension Office on October 16 from 10:00 AM to noon. There will be a support and livestock committee meeting on October 19th. The shooting sports will be at the Rifle Club on October 24th from 2:00-6:00PM. The pumpkin decorating contest is back this year. Each member may enter one decorated, original pumpkin by the 29th of October. There is also a 4-H scarecrow challenge that encourages members to create a scarecrow out of things around the house. The deadline for this is November 1. The Evening of Excellence will be held on November 6 at 5:00 PM at the NCOE High School Auditorium.

Jalynn Phillips did a talk on a workshop that she participated in over zoom. It was over food safety in Brazil. Marlee and Cooper Fuqua were in charge of snacks for the meeting. The members enjoyed making their own walking banana pudding snacks. The next meeting will be held on November 9, 2021. 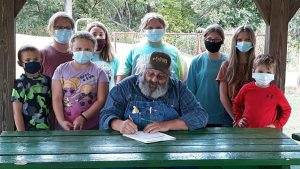